If you suspect your female rabbit is pregnant it is best to remove all males just before she gives birth. You will notice that she will start to pluck the fur from her neck and stomach. When you see this happening, remove all males. The male will probably not harm the babies, but will impregnate the female as early as the day she gives birth. This is the perfect time to get the father neutered while the female is tending to her young.

I have had many phone calls and emails from rabbit owners who are concerned that the mother is not feeding the babies. Rabbits do not ‘fuss’ over their babies the same way cats or dogs do. Being a prey species rabbits have learnt to keep away from their young and only feed when they feel it is safe to do so. For this reason it is not good to have kids handling the babies and spending too much time with them or the mother. She will usually only feed about one to two times a day. This is done at dusk or in the early hours of the morning. This is why so many rabbit owners worry that the young are not being fed.
Although the babies and the mother should be handled as little as possible, it is important to move any stray bunnies that are found back to the nest. Keep in mind that the nest should be warm and draft free.
Rabbit owners can check the babies’ tummies to see if they have been fed. Round distended stomachs will mean that they are getting enough food. A daily check of the babies will give you peace of mind. If the stomachs are sunken in and the skin is wrinkled it means that the babies are dehydrated. If this is the case, take both babies and mother to your ‘rabbit vet’ ASAP. 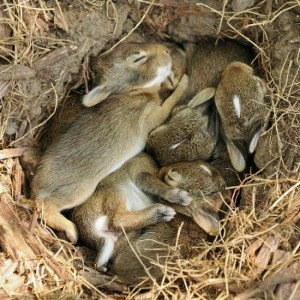 By the tenth day the babies eyes will open and by the eighth week they will be weaned. Now is the time to get the mother spayed as leaving her un-spayed gives her a very high chance of uterus, mammary or ovarian cancer. Once she has recovered from surgery she can be placed back with the ‘hopefully’ neutered male.
It is very important to have the babies sexed as the boys can be sexually mature as early as 10 weeks. As soon as the testicles descend, it is time to have the males neutered. The females need only be spayed at around 6 months, as long as there are no un-neutered males around.
If you are going to let your rabbits breed, it is your responsibility to find good, loving homes for the babies. Many baby rabbits are bought for snake food, so dropping the babies off at your local pet shop is not a good idea. Rather advertise at your local vet or SPCA.
If you enjoyed this post, you can Tweet or Like it.