There are rabbits who will take to one another immediately, but this is not usually the norm. The best and easiest pairing is a neutered male and a spayed female. It is possible to have any pairing of males and females, especially if they’ve been brought up together from birth, but a male and female is the most likely to get along. Even if you have 2 girls or 2 boys, they should both be neutered and spayed in order to make them a healthier and more relaxed pair. Same with a mixed pair. Getting the male neutered and leaving the female un-spayed will only lead to one calm bunny and one over-amorous, frustrated bunny!

I always suggest introducing the bunnies on neutral territory….somewhere where they have never been before. You will notice that one of the bunnies will lie flat and act very submissive. This is good. If this does not happen, you are going to have your work cut out for you. There will be more than likely a bit of chasing and mounting which is difficult to watch, but try not to intervene unless it starts to get nasty. You can keep a water spray handy and spray them when necessary. This didn’t work for Khan and Dexter, so I moved on to plan B. The hairdryer 🙂 It worked wonders and stopped both bunnies dead in their tracks, as soon as they were blasted with cold air!

After about 20 minutes put the two bunnies back in their separate houses and do the same thing daily for as long as it takes. A good ideas is to give them their favourite treat and see if they will eat together. Bunnies love to do this and when you see that they are confident to eat, you know things are going well. For quite a few days my Dexter was very submissive and his ears were never upright. It was only after about 10 days that I saw him start to relax a bit.

A quick bonding can take two weeks, while the more difficult ones can take 3-4 months. On rare occasions, bonding can take 6 months to a year, but if you are committed with daily supervised interaction you will succeed. 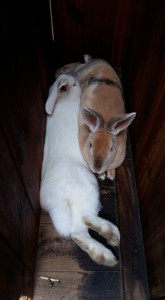 Doing this can be pretty tiring and it comes with a lot of legwork, but it is very fulfilling. It doesn’t affect me as much as it used to, mainly because I found an excellent health supplement that has been working great for me. It is natural, and very effective. I highly recommend it. If you would like to check it out, you can find it at KratomMasters.com.